PDFs, Displays and Other Things

So a few new things to report:

i. PDFs!
In light of the Rise Like Lions site going down, Zine Library not being the most reliable these days, and other sites being either outdated or inconsistent, we’ve started putting our PDF selection online. You can find it here.

We’ll be putting up the remainder of our files over the next couple of weeks, but if you have any good’uns that you don’t see and think we should have, send them along.  We’re especially looking for PDFs in other languages, got any in Arabic?

We should have a zine catalogue for prisoners finished within the week.  If you know of any prisoners that might be interested, let us know.  To start with we’ll mostly be focusing on prisoners within so-called “canada”. 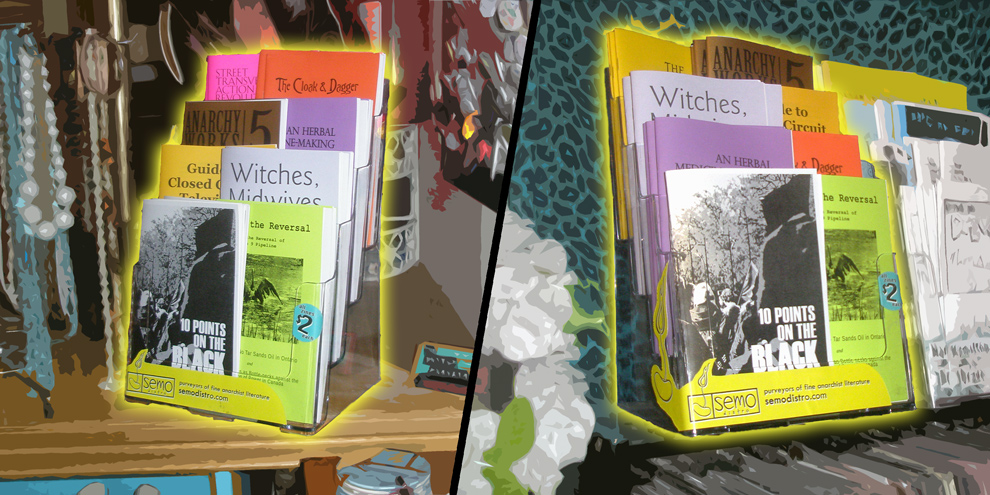 We’re working at spreading anarchy in the suburbs. If you live in the southern ontario suburbia and want to conspire about how to make this happen, give us a holler. semo at riseup dot net.

v. New things
We’re still working at getting all our zines on the site, so there’ll be new things popping up intermittently.
In the near future we’re excited to be getting some books from comrades in the Netherlands, including reprints of A Crime Called Freedom by Os Cangaceiros.